There will be no changes behind the bench with the Charlottetown Islanders for the foreseeable future.

“Both sides wanted things to continue here,” Hulton told the SaltWire Network in a Sept. 13 phone interview. “I would rate (the negotiation process) as very easy.” 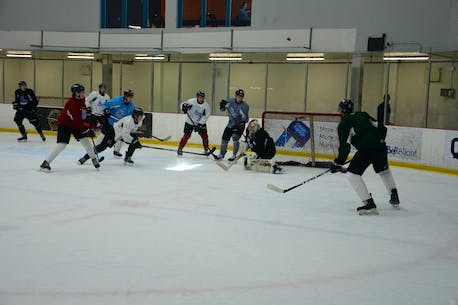 Hulton said the deals were done some time ago and it was all about putting pen to paper and formalizing all the details.

Islanders president of operations Craig Foster is pleased with the return of the team’s hockey staff.

“As we enter a new chapter in franchise history as we approach our 10th year as the Islanders, it was important for us to secure our future behind the bench with the hockey operations staff who brought us our greatest hits as a franchise,” says Foster.

Under Hulton, the Islanders amassed a record 239-128-37 (overtime losses won-lost) in 404 regular-season games while enjoying tremendous playoff success. The Islanders have advanced to the league semi-finals three times and made an appearance in the President Cup final – a five-game loss to Shawinigan last season.

Under Hulton, the Islanders never missed the playoffs and were eliminated only once in the first round.

Hulton is thrilled to see the staff rewarded and stressed that success on the ice is a team effort.

“We don’t have to worry about gear because Spider is the best in the business, and Devin was a great addition last year,” Hulton said. “With the coaching staff, we kind of collectively do everything as it is.

“We know everyone’s thought process and patterns. It makes things much easier, especially this year with a younger team that requires a lot of teaching.

“Our family is really, really happy here to really extend our time, both in hockey and in the community,” Hulton said. “It’s something that excites us all.”

A few notes on the Charlottetown Islanders hockey operations staff:

• He is entering his eighth season as head coach and his seventh as general manager.

• Selected QMJHL General Manager of the Year for the 2020-21 season.

• Has been an assistant coach with Team Canada at the world junior championships three times.

• Entering his seventh season with the Islanders.

• Take care of the defense of the team.

• Prior to joining the Islanders, he was head coach of the CIHA Voyageurs for several years.

• Had a long career as a professional player around the world.

• Entering his fourth season with the Islanders.

• Responsible for Charlottetown’s forward group as well as the penalty kill for the team, which finished last season with a league-high 84.3 percent success rate.

• Had a successful playing career that included a stint with the NHL’s Nashville Predators.

• As a player, won the Calder Cup with the Texas Stars of the American Hockey League.

• Recently completed his second stint with Hockey Canada as one of the equipment managers for the Hlinka-Gretzky Cup summer selection camp.

• Joined the Islanders ahead of the 2021-22 season and was warmly welcomed into the locker room.

The Islanders released forwards Carter Murchison and Mitchell Wagner on September 12. Hulton noted that both players picked up injuries early in training camp and didn’t get a chance to play in many exhibition games.

“Both (are) really good kids who aren’t far off the mark but just need a little more seasoning,” Hulton said.

The Islanders close out the pre-season schedule with a home game against the Moncton Wildcats at MacLauchlan Arena in Charlottetown on Sept. 17 at 2 p.m. The Wildcats defeated the Islanders 3-0 in Bouctouche, NB on September 11th.

Hulton described the Sept. 17 game as a good test for the Islanders. Hulton felt the scoreline flattered the Islanders against a veteran Wildcats lineup.

“We were flat and I didn’t think we had our skating legs,” Hulton said. “In a way it’s good because we can see what a week of training does and can we take a few steps forward to be a better team on Saturday.

“That’s what it’s all about at this time of year; we are still in the evaluation and teaching phase and will remain so for some time.

The Islanders open the regular season with a home-and-away series with the Halifax Mooseheads. The teams meet in Halifax on September 23 and return to the Eastlink Center in Charlottetown on September 24.

Jason Simmonds is a sportswriter at the SaltWire Network in Prince Edward Island. He can be contacted by email at [email protected] and followed on Twitter @JpsportsJason.